​YK11 is one of the newer SARMs on the market, offering a powerful alternative to anabolic steroids. The drug is one of the latest discoveries in the SARMs group, only properly identified in 2011 by Yuichiro Kanno. After going on to publish the results of his research, YK11 was identified as having the potential for very considerable benefits.

However, because the drug is so new, it has not yet gone through the rigorous testing required to determine whether it’s fully safe for humans. None of the published research includes testing on either humans or animals. Nevertheless, despite the fact it’s a relatively unknown compound, it has already drawn a dedicated following in the bodybuilding industry.

Like any of the SARMs a stack is a great way of amplifying and complementing the actions of YK11. However, YK11 is a very powerful compound, arguably the most of any SARM, with such similarities to anabolic steroids that some have argued it should be treated as such.

The research on YK11 is still in its infancy and as such not enough is known about any potential interactions with other drugs. It’s therefore recommended to run a cycle of YK11 solo rather than in a large stack until more is known about the effects. 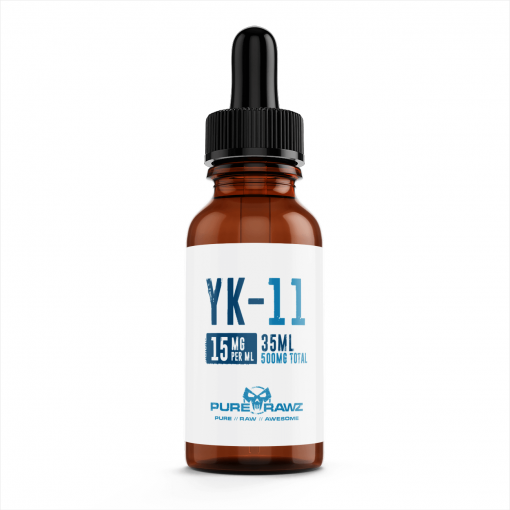 SARMs, including YK11, are not hepatotoxic as they are not methylated. This plus the fact that YK11 has a high level of oral bioavailability means that it can be ingested rather than injected.

For men, a maximum dose of 2-5mg twice a day should be taken for optimal results.

The half life of YK11 is very short which is why a twice-daily regime is recommended for the best results. Early suggestions indicate that the half life would be in the region of 6-10 hours.

YK11 actually increases the ability to generate muscle so is often used within a bulking cycle. It can, however, also help during a cutting phase. This is because it will add lean mass, and not just bulk. Therefore, it can prevent the loss of muscle which can occur when calorific intake is slashed making it ideal for cutting cycles.

Although still in its infancy, the potential uses for YK11 on a bulking cycle are almost limitless. Early indications suggest that this could be the strongest SARMs to hit the market providing the greatest potential for adding sheer muscle.

The compound works by inhibiting the action of myostatin on the muscle which in turn allows for far superior muscle growth.

The biggest benefit of YK11 is undoubtedly the fact that it can change the body’s ability to generate muscle, increasing the amount of muscle which can be added. This occurs because YK11 inhibits the production of myostatin, a compound which reduces muscle growth. Without the myostatin impairing the muscle’s ability to grow, the body is able to add lean tissue much more easily.

The effect on muscular growth is so profound that the effects of YK11 can be said to be comparable to testosterone, far exceeding the more limited androgenic effect that other SARMs produce.

Because YK11 generates more muscle cells and strips away inhibiting factors, it can help individuals to exceed their own natural genetic ability to add muscle. Therefore, this compound can provide a big boost to individuals who would otherwise have a much more limited stature.

In addition to these very powerful muscle-building effects, YK11 can deliver the other benefits that SARMs typically provide such as fat loss, improving strength and increasing the ability to recover more quickly.

Although SARMs are a powerful drug, they don’t carry the same range of side effects that you’d expect from an equivalent anabolic steroid.

Hair loss, liver toxicity and acne are often concerns with steroids, particularly those of an androgenic variety. These side effects don’t occur with YK11. This is because although YK11 affects the androgen receptors, their interaction is far more selective than with anabolic steroids. This is what helps to produce the desirable effects while still avoiding the majority of the undesirable consequences.​

If taken in high doses, YK11 has the ability to increase aggression but at the suggested dosage this should not be an issue.

​More information is required to identify whether there are any major contraindications. However, what is known is that there is no adverse effect on prostate growth so use of YK11 may be possible when other drugs are precluded.

Is It Safe For Women?

Although YK11 is arguably the strongest SARM identified to date, it has a very low related androgenic effect. This means that the unwanted side effects such as male pattern baldness in men, and virilization in women are not much of an issue.

For this reason, women are able to take YK11 and it’s unlikely that virilization will occur, providing the recommended dosage is adhered to. For women this means taking no more than 0.5-2.0mg twice a day.

Will PCT Be Required?

SARMs don’t have the same impact on the production of testosterone that anabolic steroids have, so the potential for the luteinizing hormone (LH) in the body to be affected is far less.

Nevertheless, SARMs can still suppress the production of testosterone and without any PCT, it can take much longer for the body to bounce back. It can also be much harder to hang onto gains and keep fat off; PCT can help retain the body you gained on the cycle for longer.

For this reason, it’s widely suggested that at least a mini-PCT is carried out following a SARMs cycle. Although much still needs to be learnt about YK11, the same PCT is advised as for any other ‘strong’ SARM.​