NOTE: TIANEPTINE SODIUM IS A FASTER RELEASING VERSION OF TIANEPTINE WITH A SHORTER HALF-LIFE.

Tianeptine has been around since the 1960s and is particularly popular in Europe (the drug was patented and first approved in France). Coaxil is commonly prescribed throughout Europe and some parts of Asia for its anxiolytic (anti-anxiety) and anti-depressive effects.​

What makes Tianeptine so effective is that it reduces stress on the brain, both physical and mental. Tianeptine causes stress-induced alterations morphology and synaptic plasticity. As it alleviates stress, it also improved learning, brain cognition and memory, two things often diminished by serious depressive conditions. (Zoldaz & et. al, 2010). Like many drugs, there are still studies and concerns that the efficiency and effectiveness of Tianeptine as a whole is difficult to ascertain. After all, Tianeptine, like many drugs, can have a vastly distinct effect on some people and entirely different one on others. More studies are needed to determine if there is a universal dose or regiment that can produce absolute results.

This multitasking drug has a great deal of potential in medicine, therapeutic psychological and counseling goals, and provides a potential enhancement to brain function. Finding way to improve the mental state of those suffering from debilitating disease and emotional conditions that are both effective, efficient, and has a limited amount of serious side effects is worthwhile.

Granted, it is necessary that experts and researchers continue their studies to determine if there are any deleterious effects or unforeseen consequences that have yet to be discovered. However, as with all drugs, regardless of the side effects, should not be taken outside of a professional’s care or for recreational purposes. Even so, it would appear that the future of Tianeptine is to be a positive one, and with further research and study may become one of the mainstay medications prescribed to address depression in more patients who require them.

Tianeptine is a water-soluble nootropic used for its antidepressant and antioxylic qualities. Tianeptine is an SSRE (selective serotonin reuptake enhancer) in contrast to being an SSRI like many anti-depression and anti-anxiety medication. It is suspected that Tianeptine due to it being an SSRE lacks adverse side effects such as cardiovascular activity, anticholinergic activities, and being a sedative like most SSRIs. However similar to SSRIs, Tianeptine onset-of-action takes approximately between 2 to 6 weeks but some benefits have been reported to be observable within the first week of use.

Tianeptine is purported from one study to have plausible benefits in regard to memory and learning abilities through the increase of elastic memory in non-stressed induced patients. By reducing the effects of serotonin in the lymbic system as well as the pre-frontal cortex Tianeptine causes mood elevation compared to the mood depreciating effects common with SSRIs. In one study, Tianeptine was found to be also be a logical treatment for Treatment Resistant Depression (TRD) in conjuncture with or without medication as well as having believable anticonvulsant and analgesic qualities. 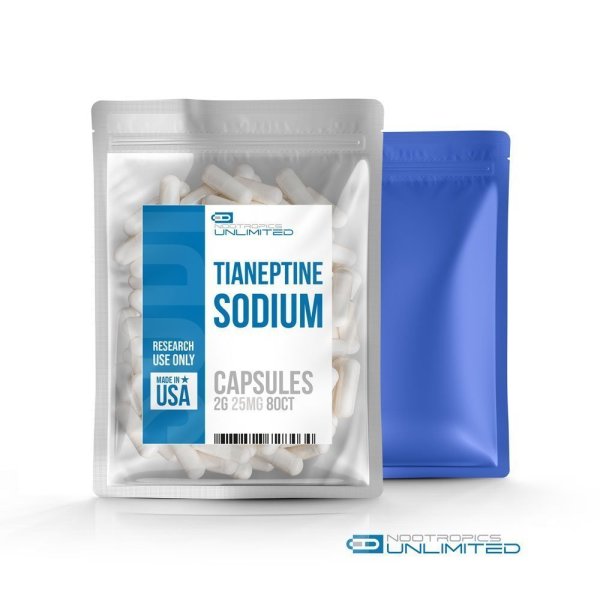 The typical dosage for Tianeptine is 12.5mg. Typically, you buy the substance in tubs of around 1 gram.

Unlike many antidepressants, Tianeptine has few negative side effects; Tianeptine is showing promise as an alternative to traditional antidepressants and their addictive nature and long-list of side effects (Gassaway & et. al., 2014). While the majority of antidepressant users do not abuse or misuse the medication, they are prescribed, that does not speak to the rest of the public. Antidepressants are a very popular and dangerous recreational activity.

For people who do not need them, the taking of such drugs can come with many negative side effects and potential addictive properties (Evans & Sullivan, 2014). Tianeptine may be a much safer alternative to many of the antidepressants on the market today. The listing of side effects that are associated with are minor and tolerable, they include drowsiness, dry-mouth, insomnia, dizziness, constipation, bouts of low blood pressure, and some patients describe unusually vivid dreams.